We’ve watched movies and read books about robots and artificially intelligent beings for nearly 100 years. Human heroes saved Sarah Connor, protected the world from Decepticons and beat them in chess. These fictional tales, however, twist our understanding of artificial intelligence (AI) technology in the real world—particularly in the business world.

“You go back 10 years, and one of the big goals of AI was the ability to have a conversation with your computer. We take that for granted now, so much for granted that it’s no longer AI,” says David Matthews, Lead Solution Architect for Sky, a leading European entertainment company.

So, if it isn’t simply robots or verbal computer conversations, what is AI? And what are the applications for AI technology in the real world, particularly for businesses? 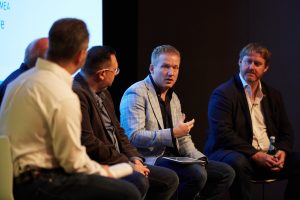 Machine learning (ML) is one of the most prevalent AI applications in use today. However, machine learning use cases are as diverse as the technology is ubiquitous. Playtika is a great example.

Playtika is one of the most innovative gaming companies in the world, known for popular mobile games like Board Kings and World Series of Poker. To stay ahead of the competition and continue to delight users, innovation is key. Machine learning is part of their winning technology formula.

“For us, AI and ML is no longer experimenting. It's actually live and a productive part of the business technology. We're using it in everything from actual segmenting and actually enhancing data for our players. We're seeing a lot of business benefits coming from ML models,” says Erez Rachmil, vice president for IT and R&D at Playtika.

The Playtika technology team uses machine learning models to predict and anticipate user behaviors. Predictive analytics through machine learning also enables the IT team to be smarter about application virtualization, load balancing and workload management. The result is a great experience for users.

Another powerful use case for machine learning comes from Siza, a Dutch healthcare organisation which supports people with physical, mental or multiple disabilities and people with autism or non-congenital brain injuries. The company makes significant technology investments to empower these people to better organize their own lives.

“We often talk about augmented healthcare as the new thing to ensure that we can build more technology into the healthcare processes,” says Jorrit Ebben, chief strategy and innovation officer at Siza. “What we try to do is introduce more data-driven decisions for our healthcare professionals—as an aid for them to do even better work than they do now.”

Ebben recalls a specific use case of a patient who uses a wheelchair with an integrated respirator. If the wheelchair or respirator fails, the patient could be in life-threatening danger.

“We can use artificial intelligence and also machine learning to predict whether his respirator's still going to work or not. And that's the kind of stuff that we want to introduce to make sure that we can help him earlier than he knows that he needs help,” Ebben says.

At the Edge of IoT 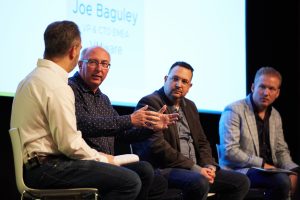 Ray O'Farrell, VMware CTO, says that the next realization of AI's business value will come from data insights.[/caption]

Embedded devices, as VMware CTO Ray O’Farrell points out, have been around for years. The more recent introduction of intelligence in these devices, however, has the potential to revolutionize every industry, every business and every human experience.

“The big difference that you see now is that [Internet of Things] IoT devices are producing enough data, and you want to be able to do something with that data. It's less around the device (which, you know, can be smart and cool), but now I've got real data that I can do something with. And that's where we begin to see innovation coming from,” O’Farrell says.

“The combination of IoT and edge will bring a lot of new possibilities. We've got over ten million connected homes throughout Europe. We've got a supercomputer in our pockets. In a home, there’s tons of technologies we can use at the same time. We have to connect all of those into one platform and make sure we can apply data science to it, and also have the assurance that it’s quick enough to adapt to the customer’s needs,” says Matthews.

Security in an AI World

Security is a major concern for nearly every business as technology grows more pervasive from data center to cloud and branch to edge. AI adds a new layer of complexity, but also the opportunity for new approaches to protecting modern businesses and customers.

“We should probably assume that at some level, there are vulnerabilities in our infrastructure. How do we (prepare) for more that will rock us at some stage?” Matthews asks. “I think what those vulnerabilities have shown for us is that it's almost like the companion to zero trust as a networking concept. It's just shifting that security posture to look at the various threat factors as life from day one.”

Enterprise AI and the Future of Networking

Dive into how AI technology reshapes the future of networking and security.

Playtika, Siza, Sky and VMware are among hundreds of thousands of companies innovating the way AI and its associated technologies impact our world. As the pace of technology continues to accelerate faster than ever before, tomorrow will bring even greater innovation.

“It was described to me once as taking a picture of a river,” Baguley says of the rapid rate of AI technology innovation. “That’s what the river looked like at the moment you took the picture. Before that and after that, the river was completely different. It’s where the river’s going, how it’s changing, how it’s moving—and for AI, that’s probably more important. And that’s what people like ourselves spend our time looking at.”

2019 and the Innovation Inflection Point