As a chief technology officer, I’m regularly asked about emerging technology. Quantum computing came onto my radar as having the potential to become a mainstream technology about three years ago. But the first time I tried to give a high-level explanation, I realized that the concept is incredibly complex. Thankfully, I’ve had the chance to dig into the topic, which led to my presenting at VMworld 2020. I’m now convinced that practical applications of quantum computing will emerge within the next decade or so.

Back in 2010, I had the good fortune to attend an industry day at MIT. Attendees heard from several leading academics about technology areas far outside their normal day jobs. One speaker who captured my imagination was Scott Aaronson. He’s a recognized expert in quantum computing, who is very good at making his field accessible to a wide audience.

Among his many publications, Aaronson collaborated with well-known cartoonist Zach Weinersmith on a comic strip that gives a clever perspective on how to explain quantum computing. The comic addresses the most common misconception about quantum computing: the idea that quantum computers can solve hard problems by trying all the answers in parallel.

That misconception is easy to fall into. I suffered it from initially myself. The reality is much more subtle.

It’s not trivial to explain how quantum computing works. A basic understanding comes in handy when thinking about the practicalities of how this technology can be used. The core idea is that a quantum bit—often referred to as a qubit—captures the probabilistic behavior seen in quantum physics, which is fundamentally different from classical computing. A classical bit is always in precisely one state—one or zero. By contrast, a qubit is in a superposition of both states—one and zero—and only when measured does it collapse into either state. By carefully manipulating multiple qubits without letting them collapse, a quantum computer can address problems that aren’t readily solved by classical computers. 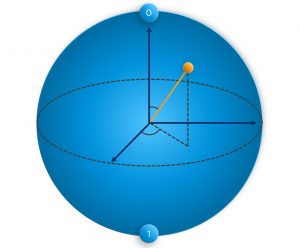 State of a qubit is represented by a position on a sphere.[/caption]

Quantum computers can already tackle a number of useful tasks. One of the most well-known relates to cryptography. Cryptography underpins the security and privacy of almost all digital information. Every time you see that a website is “secure,” a public-key cryptography algorithm provides the assurance of security.

Much of cryptography is based on the idea of one-way functions—operations that are easy to perform in one direction and hard in the other. For example, it’s easy to multiply two prime numbers together and get the result, but very hard to find the prime factors of a sufficiently large number.

IBM's recent roadmap suggests thousand-qubit computers could arrive within a few years if current rates of progress continue. And that starts to get us close to the point where some of today’s common cryptography algorithms might be considered vulnerable.

My colleague David Ott has a detailed post on how this potential challenge to cryptography is being addressed and how fast we might need to adapt. Changing our cryptographic infrastructure—which has built up over decades—is no small task. Nor is it a simple thing to swap out one piece of cryptographic software for another.

Planning for “cryptographic agility,” in which algorithms can be easily replaced before they are broken, needs to start soon. This is sometimes compared to the planning that went into preparing for “Y2K.” We can’t wait until after the problem has already arrived.

Quantum computers have plenty of potential applications beyond cryptography. Anything that entails modeling particles small enough to exhibit quantum behavior, such as molecular chemistry and biology, is a good candidate for quantum computing approaches. Areas that are already being researched include cancer genomics and drug modeling.

The example of machine learning (ML) raises some interesting points. Today, you can access all sorts of exotic hardware via cloud services. GPUs and TPUs are prime examples used for specialized tasks, including ML. We should fully expect that quantum computers will also become a form of specialized “accelerator” that can be consumed as a cloud service. Indeed, there are early examples of that today.

When we look at how much power is consumed by classical computers (including GPUs), one of the major impacts of quantum computing might actually be more cost- and energy-efficient approaches to problems. This “quantum advantage” will enable organizations to perform tasks much more efficiently on quantum systems.

Quantum computing is still regarded as an emerging technology. But for anyone who’s seen both the power and the limitations of classical computers over the decades, it is exciting to see that we are entering an era in which those limits may be overcome by a new generation of quantum computers.

There are two main takeaways for IT leaders.

How Will It Impact the IT Industry?’ from VMworld on-demand