It’s only been a few months since the first 5G-enabled consumer devices hit the market, but the industry is already preparing for what comes next.

The typical 10-year technology cycle is part of the reason. 5G promises download speeds many times faster than current 4G LTE networks and significantly lower latency times. But 6G is set to raise the bar even higher, with speeds estimated at 100-times faster than 5G. It also promises increased bandwidth to keep consumers more connected than ever before.

Analysts say 6G is at least a decade out. So, what is 6G? And why are we talking about it now?

6G, as the name suggests, is the sixth generation of mobile connectivity. It’s still unclear what final form 6G will take until it is standardized. But it isn’t too early to speculate which technologies will be included and which characteristics it will have.

The high-level vision for 6G is to deepen the connection and integration between digital, physical, and human worlds. However, at this point, a lot less is set in stone when it comes to the new generation.

What is apparent is that 6G will benefit from the backend changes made to mobile networks to power 5G. Technology trends seen with 5G, like virtualized networks, are setting the stage already by enabling things like specialized deployments. Operators have densified radio networks with more antennas. Now, it’s easier to get a signal, especially indoors, while cloud technologies and edge computing mean data can be processed closer to users—even at scale—so latency is much lower.

Essentially, 6G will build on this foundation and introduce new capabilities far beyond the limits of 5G.

How Is 6G Different from 5G?

The most obvious difference is speed. 6G will use more advanced radio equipment and a greater volume and diversity of airwaves than 5G. This includes the use of extremely high frequency (EHF) spectrum that delivers ultra-high speeds and huge capacity over short distances.

In terms of coverage, 6G could become universal. 6G satellite technology and intelligent surfaces capable of reflecting electromagnetic signals will deliver low latency, multi-gigabit connectivity. This is especially transformative for the parts of the world where it has been too difficult or too expensive to reach with conventional mobile networks. Remote parts of the globe, the skies and the oceans could all be connected.

5G already harnesses AI for optimization, dynamic resource allocation and data processing. But extreme-low latency of less than one millisecond and distributed architecture means 6G will be able to deliver global, integrated intelligence.

6G will also be more efficient than its predecessor and consume less power. Energy efficiency is critical for a more sustainable mobile industry because of the anticipated growth in data generation.

Evolution of the Next Big G

Historically, when we’ve gone from one wireless generation to the next (3G to 4G, 4G to 5G), it meant significant infrastructure investments and rebuilding customized systems.

“You can’t just flip a switch to a new network generation overnight. You add the new technology as an overlay extension, subtending off the previous generation as you iron out the kinks for a smooth transition to the next generation over time. 5G introduction as a capacity augmentation for LTE networks, as we work through the nuances of time-sensitive communications in the labs, is a living example of such a transformation” said Kaniz Mahdi, vice president of advanced technologies at VMware.

Preparing for the next big telecom evolution years in advance is nothing new. While it’s still early for this effort and plenty of details remain to be worked out, we already know some of the things that need to be in place for 6G to be successful:

Existing services will be transformed. But 6G could be the network that finally delivers use cases from the realms of science fiction.

6G will also enable location and context-aware digital services, as well as sensory experiences, such as truly immersive extended reality (XR) and high-fidelity holograms. Instead of today’s video conferences, it will be possible to speak to people in real-time in virtual reality (VR), using wearable sensors so users have the physical sensation of being in the same room together.

And because 6G is so much more power-efficient than 5G, it may be even possible for low-power IoT devices to be charged over the network. This would transform the economics of mass deployments and aid sustainability.

The Path to 6G 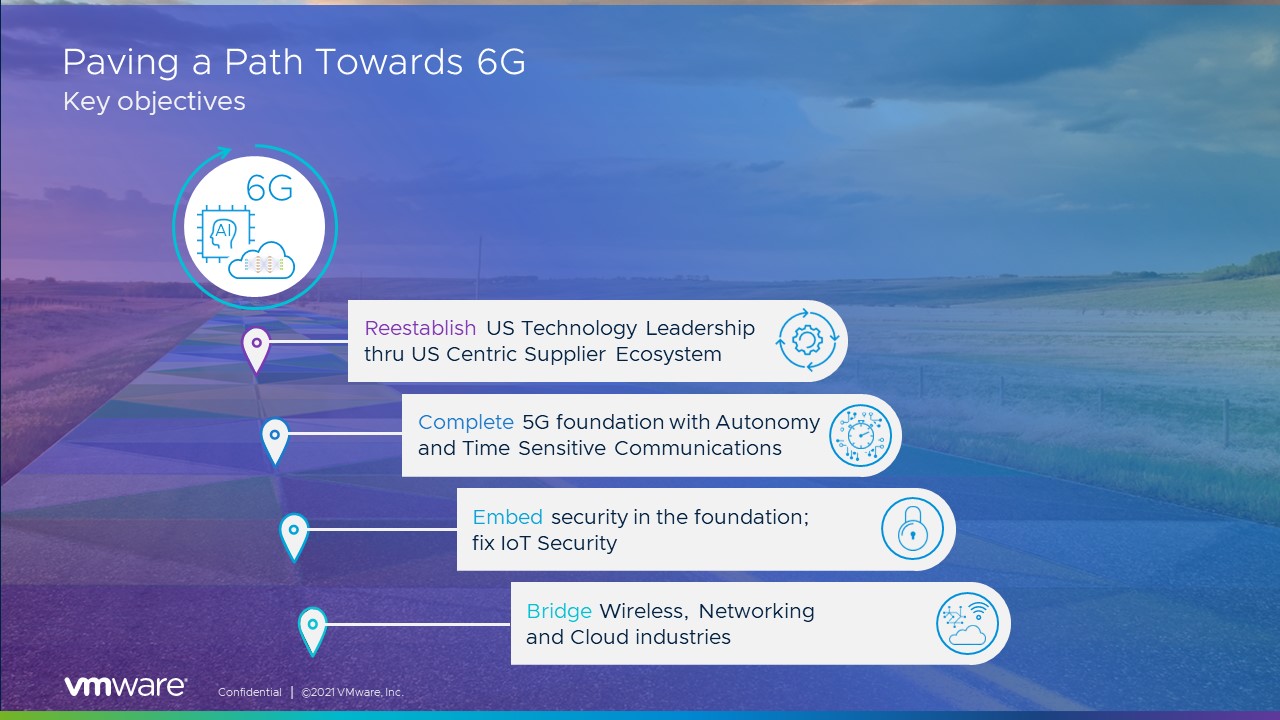 Once fully realized, a 5G connected world is anticipated to be an ecosystem of interconnected intelligence components, systems and fabrics enabled with a fusion of technologies that sit at the intersection of wireless, networking and cloud industries.

Foundational imperatives of this unification for the 5G era is paving a path toward 6G:

Currently, development is still at a very early stage. A final release will depend on the pace of rollout and a consensus on the technologies that eventually comprise the final standard. Just as 4G and 5G will coexist for some time and share the same core network, it is likely that 6G and 5G will exist simultaneously, as well.

“Hopefully by the time we are able to comfortably and confidently say, ‘Yes, I have delivered the 5G promise,’ spatial computing, the evolution around the edge all the way to the user device, and advances in robotics will be squarely in place to shape the new landscape for 6G,” Mahdi said.