For most organizations, agile culture and methodologies are limited to software development—but they shouldn’t be, according to Andrei Popov, CIO of Raiffeisenbank, the Russian arm of Austria’s Raiffeisen Bank International. 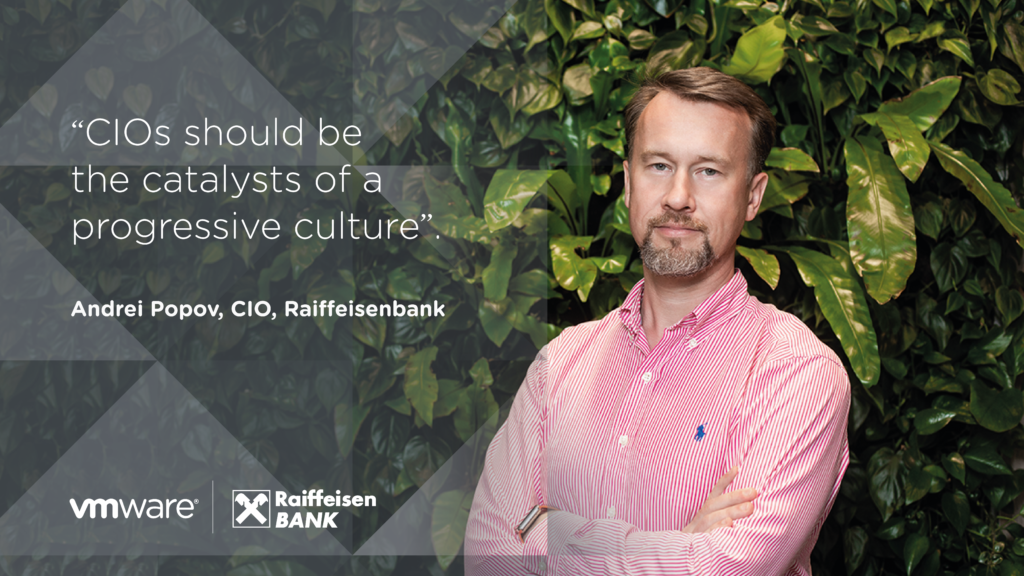 VMware’s Agents of Change initiative celebrates smart CIOs who challenge the status quo. By harnessing the transformative power of technology, they are creating unlimited possibilities for their businesses. Here’s the next individual in the Agents of Change series: Andrei Popov, CIO of Raiffeisenbank.[/caption]

“The spirit of agile techniques, which have transformed software development, can and should be applied across the organization,” he says. “It improves collaboration, innovation, a focus on what’s really important to the customers and trying to do it faster.”

What started off with the adoption of agile in the developer-led teams at Raiffeisenbank, soon radiated out to other core functions and eventually went on to impact the entire organizational culture. Popov continues, “If I look at everything I’ve achieved in my role as CIO over the last seven years, I think the shift to an agile-inspired culture is one of my most significant contributions. It helps the bank understand what is really important and valuable, and not get bogged down in formalities. After all, as the bank’s CIO, I should be the catalyst of a progressive culture.”

Popov’s passion for agile has in part come from the pressure on the bank to constantly and rapidly innovate, in order to remain one of the leading banks in Russia. “The new world of banking is undoubtedly digital,” he reflects. “Technology underpins the products and services that solve our customers’ problems. Our IT department must facilitate rapid innovation for the banks to remain successful.”

The bank’s private cloud is key to enabling the developer teams to work at a rapid pace, and the recent deployment of VMware vRealize cloud management platform has accelerated the developers’ cycles by another 10 percent. This, in turn, has increased the bank’s time-to-market. Popov says, “Our VMware-based cloud helps us create the very solutions that meet the needs of our customers.”

The bank also relies on its cloud for experimentation with new technologies. Popov considers blockchain, big data, artificial intelligence (AI) and the Internet of Things (IoT) to be the key disruptive trends of today, and the bank is independently investigating all of these, as well as with start-ups and customers. “While they are exciting on their own, the golden opportunity lies in how these will all intersect. And the race is on to achieve that. It will be a game-changer for sure,” he muses.

Popov laments the lack of experts in these fields, which can hinder progress and adoption. “Finding and educating specialists in areas like blockchain and AI is one of the bank’s biggest challenges right now,” he says.

However, despite the skills shortages that inevitably accompany new technologies, Popov is hugely optimistic about the impact these can have not just in the banking sector, but beyond in society. “New technology really excites me because it gives us the opportunity to do something really meaningful—to cooperate and solve the world’s big problems.”

Learn from other Agents of Change.