Node Africa CEO Phares Kariuki has always been passionate about the power of cloud technology to transform Africa’s economy. With the recent COVID-19 outbreak, he is even more resolute.

“The outbreak has been a wakeup call to many business leaders,” he says. “They now realize the traditional model of IT is broken. Firms who are behind on the digital curve are struggling to adapt while those that have taken a digital-first approach are proving more resilient.”

However, as Kariuki and his team continue to guide companies through the uncertainty, he remains optimistic and sees exciting times ahead. 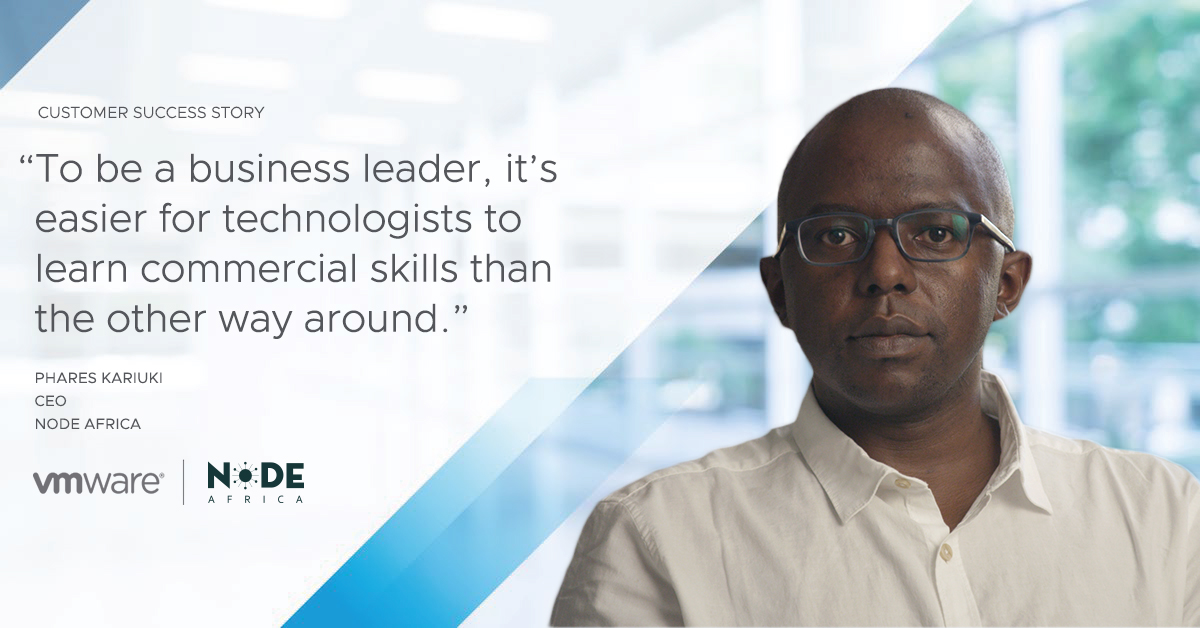 Unsurprisingly, Node Africa is seeing a lot of interest in tools like video conferencing and virtual desktops as the Kenyan government has mandated that employees in non-essential industries work from home. While this change represents a huge cultural shift, as its the first time many have worked remotely, it also presents new opportunities.

“Lots of businesses have seen that it doesn’t negatively impact productivity. So I’m sure this model will continue after the government restrictions are lifted,” says Kariuki.

The CEO also highlights exciting pockets of innovation: “The uptake of cloud in education has skyrocketed,” he explains. “We’ve seen a surge in investments in e-learning platforms—many schools and educational institutions are continuing to invest. You can’t just pause education.”

When you look at the world’s most successful business leaders, both before COVID-19 and today, Kariuki believes technology expertise is the common factor.

“It’s not by chance that the four firms with trillion-dollar valuations—Apple, Google, Microsoft and Amazon—are led by engineers. To be a business leader, it’s easier for technologists to learn commercial skills than the other way around,” says Kariuki.

A technology-led world means organizations have to get digital strategy and software right, he believes. “The digital revolution doesn’t give us a choice. There’s no option to sit down when the music stops.”

For example, Kariuki watched banks in Kenya suffer when they failed to embrace technology’s potential.

“When one bank enabled a customer to open an account from home, competitors requiring you to show up in a branch with your birth certificate and tax documentation were quickly left behind. They were caught off guard,” he says.

To survive digital disruption, Kariuki believes firms need to start with outcomes. “Forget about tools. Understand what your customer needs and the tools will follow,” he says.

In Kariuki’s experience, firms often falter when they aim too far too fast. “If you can’t run your own basic environment and you don’t collect basic customer data, how can you roll out AI? You have to take small steps. Learn how to crawl, then walk, then run. Only then can you run a marathon,” says Kariuki.

Guiding organizations on this journey is Node Africa’s reason for being. “When you work with a company to chart all the possible paths to where they want to go, you give them the confidence to choose how they get there,” he says.

Kariuki believes trust is the cornerstone of the journey. His aim is to get businesses to the point where it is second nature to take data into the cloud. But that process takes time.

“If a customer is reticent to put information in the cloud, we start by helping them manage it better in a private environment. We move smaller, lower-risk applications. Slowly, the customer sees they work better for the organization. They become ready to trade perceived control for agility,” Kariuki says.

The productivity gains can be a revelation. “It’s a few years now since Marc Andreessen said software is eating the world. But while its clear to see how software is shaping multiple industries and everyday lives, I don’t think we’re there, yet. I think the disruption is just getting started.”

Watch this video to hear more from Kariuki.

Learn From Other Agents of Change