“Be a disruptor. Don’t wait for others to disrupt your business.” This leadership advice comes from Ilan Buganim, Bank Leumi’s CTO and CDO—the latter of which could as easily stand for chief of “Disruption” as it does “Data.” Under his guidance, Israel's oldest banking corporation embraced technology to change the way it operates and today leads the digital banking sector in Israel.

Buganim acknowledges that being a disruptor is not always easy: “As soon you disrupt your industry, your competitors try even harder to outwit you. To remain at the top, you have to think differently and act differently, and find opportunities where others haven’t looked.” 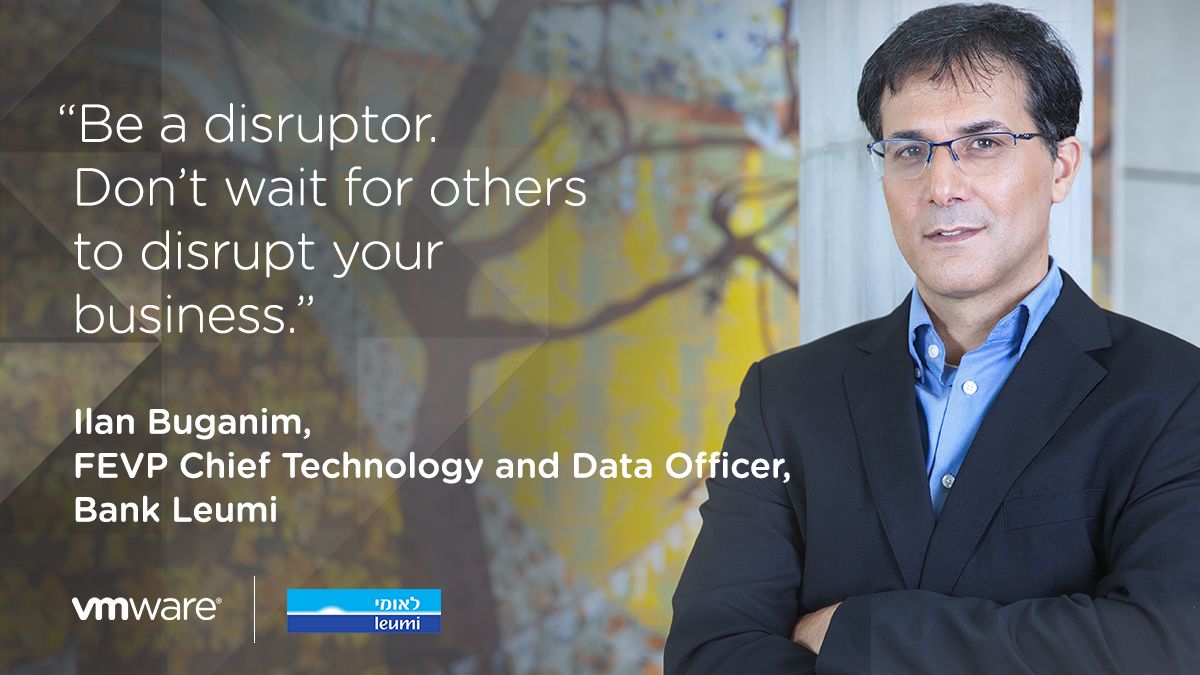 VMware’s Agents of Change initiative celebrates smart CIOs who challenge the status quo. By harnessing the power of digital transformation, they create unlimited possibilities for their businesses. Here’s the next leader in the Agents of Change series: Ilan Buganim, CTO and CDO of Bank Leumi.[/caption]

Foreseeing the Future of Banking

Leaders of Bank Leumi pride themselves on taking a different approach to the market. The Bank was ahead of the game in anticipating how the banking sector would change, and foresaw the upcoming impact of financial technology (fintech) and tech companies.

Having also observed huge changes in consumer behavior with the advent of social and mobile, the bank surmised that customers were ready for a new kind of banking: intuitive, digital and personalized. So Buganim’s team began to create a digital foundation to support the Bank’s vision of being the Google and the Facebook of the financial industry.

“We built a very agile, cloud-based infrastructure to support constant innovation,” said Buganim. “It enables the Bank to rapidly respond to changes in the market and build new services really quickly. We can be first to market with unique banking services that people want today.”

This is how Bank Leumi built and launched Pepper—a fully mobile, personalised bank—in less than 15 months. “With Pepper we’re creating a revolution in how Millennials think about and manage their money in the digital world. That’s pretty exciting,” he said.

Pepper later became the groundwork for a new, cloud-based digital banking platform available to banks worldwide. Bank Leumi, recently awarded the title of Dell Technologies Innovator, now partners with tech companies on this solution, as well as other banks undergoing their own digital transformation.

Reflecting on the changing role of IT, Buganim said, “Technology is a key differentiator in finance. CTOs need to steer and lead the business’ technology path.”

He continued, “However, disruptive technologies now emerge faster than most organizations can absorb. This leads to increasingly complex technology environments that are hard to maintain and even harder to secure. The CTO has to constantly balance and improve seemingly conflicting requirements like agility, security and performance.”

“It can be tough,” he admitted. “But I wouldn’t want it any other way.”

Learn from other Agents of Change.